Really. Write it down. You’ll need it in just a bit.

Lookee there, you already know the answer to the one thing you could do to make everything better. Don’t you already feel much better? Let’s juice it up with some visualization. Visualize yourself already having done that thing. See how much better you feel?

This state of bliss is an effect of what I call ifonlyI (pronouned Phonely-eye).

Here’s how it works:

I’d be remiss to exclude mentioning lesser forms of ifonlyI. Here I parse the different brands.

Goal: Trigger dopamine, serotonin, and norepinephrine while evacuating your bank account. As described above this form is most powerful when you combine positive thinking techniques with action you never intend to take. A good money sucking cult comes in handy, but slot machines are better.

I used to design video games for casinos, and while my boss applied the euphemism of “entertainment” to our business, I learned that the Disneyesque design and animation we labored to create is almost irrelevant to the real experience of ifonlyI. It’s actually the statistical modeling that evokes the enticing trance and makes the slot machine the drug of choice and the cash cow of every casino.

Optimizing the frequency and sizes of payouts is at the heart of stim ‘n suck ifonlyI. The models are based on an average of one million “pulls” on the one-armed bandit’s one arm. The average take is dictated by law and can be as high as 25% (in Nevada). At that rate on dollar machines the casino takes out $250,000 for every million that goes into them.

The beauty is what the casinos do to optimize ifonlyI. It doesn’t work if they give you your dollar back 3 out of every 4 times you yank the lever. You never get to feel lucky because you never win big. If they pay $750,000 only once in a million pulls, you never feel like you’re “making progress” during the 999,999 pulls they don’t pay anything. Instead, payouts and rates are randomized with different sizes and frequencies to maximize stim ‘n suck ifonlyI. Casinos will also place machines with small, more frequent payouts near machines that drop bigger jackpots but less often. It doesn’t matter which one you pick; you’ll feel like you’re sitting at both, winning often and big. And because you are unconsciously wishing, “If only I win this time I could …” every few seconds, ifonlyI courses through you in a steady stream. Trance comes easily and money disappears effortlessly. Mission accomplished.

For maximum stim ‘n suck ifonlyI cultivate your talents outside the realms of casinos, shopping malls, and mega churches. Try to ignore your big buried wishes, and make sure you stay passive in the face of challenge.

Fantastical IfonlyI.
Goal: Maximize escapist pleasure and comfort. Watching movies is probably the best way to get ifonlyI in fantastical form. It’s better than TV which ain’t bad. The characters on screen live the lives of your dreams without any effort on your part.

Books are probably the worst since they require imagination. Daydreams are dangerous, too. Some consider daydreaming a gateway form of ifonlyI, and while some feel they can control their fantasies, daydreaming can lead to mental simulation or worse— action. Stick with movies.

Hypothetical IfonlyI.
Goal: Act like there’s a solution. At its root ifonlyI might be confused with a hypothesis. If only I _____, everything will get better. The danger with taking this hypothesis literally is that you might actually test it. You might find out what actually works to make your life better, or worse, what doesn’t work. You’d be tempted to change something about your behavior. Best not to test. It’s a buzz kill.

Hypothetical ifonlyI certainly can provide an occasional hit when you bandy about random non-sequiturs related to diet changes or windfalls (or shortfalls of spouses). For example, “If only he’d ___, then everything would be better.” Still, it’s probably best to drive ifonlyI statements into your unconscious so they can act without your thinking about them. Remember the slot machines.

In case you don’t have your own, here is some tried and true ifonlyI. Most of these statements come from other people, but if pressed I’d be happy to acknowledge which ones are mine. 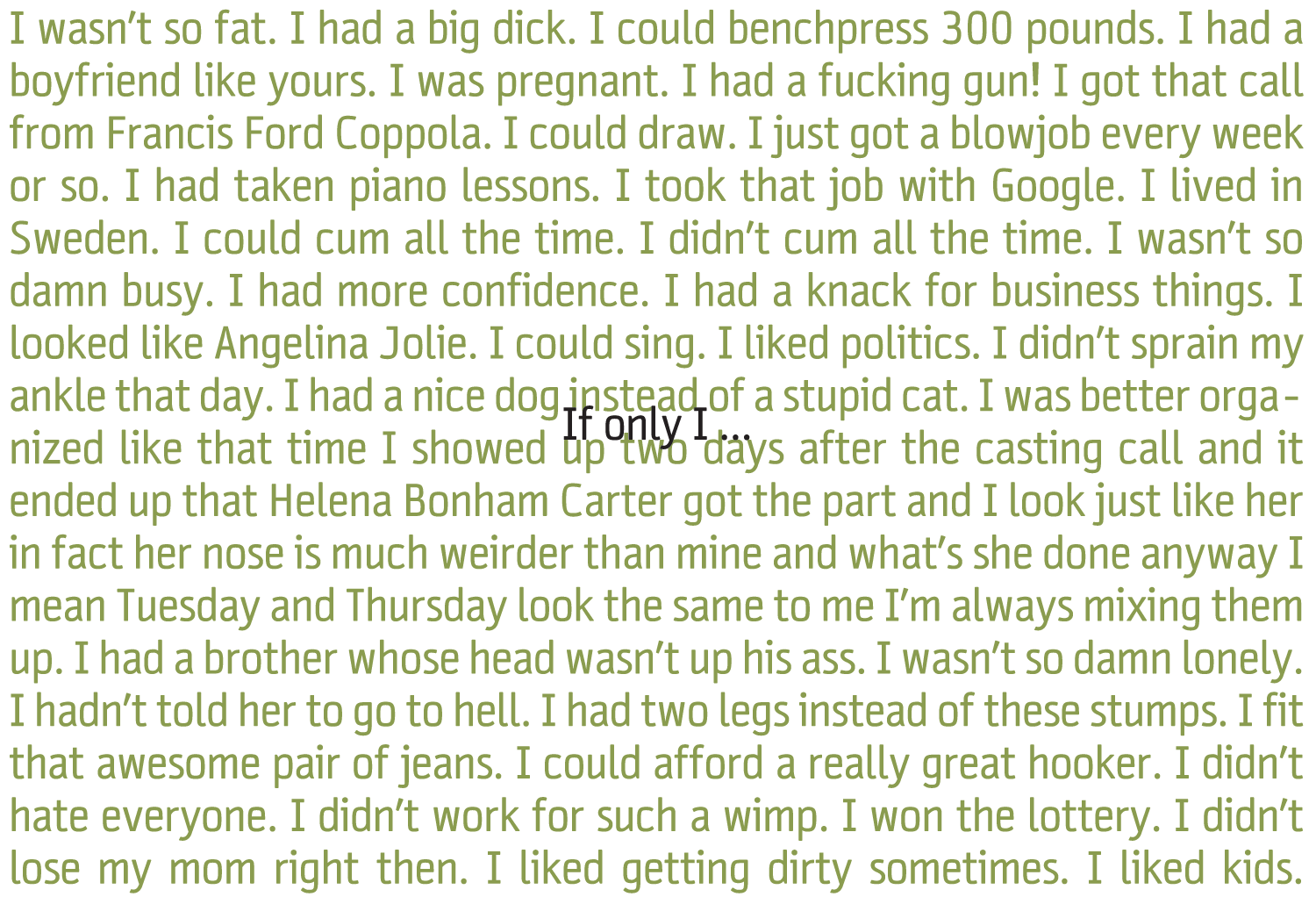 How do you complete the sentence?