I move into a new place in a couple weeks, one where I share maintenance responsibilities of the property with the two other co-owners who will live in the flats above me. Living on the ground floor I get exclusive use of the garden in the back, and it’s my responsibility to replace the fence before it falls over from rot, which will happen in a couple years.

Our home is on a block of the city where buildings are squeezed together side-by-side, and the backyards comprise the center. The green hole of a square wooden donut† is a luxurious refuge from the bussle and noise of the streets. Each yard is contained by a fence. My little garden seems tiny compared to the endless suburban backyard I had at my disposal as a youngster. Having no fence would quadruple its size and in the city make it a veritable pastoral expanse.

So it begs the question:

A quick text to my friend at the San Francisco Planning Department asking whether or not the city requires backyard fences returns the following:

Here are some things that could happen without a fence:

I catch kids smoking dope on my back steps.

I have to give back the toys that fly into my yard.

Someone more likely sees me naked at some point or many.

I more likely see someone else naked at some point or many.

The neighbors’s great dane wonders through my bedroom and drinks out of my toilet.

My other neighbor sues me because, sleepwalking, he breaks his ankle on my jiggly bricked pathway.

The burglar that somehow breaks into the other neighbor’s house, when the alarm sounds, escapes out the back and finds refuge in my daughter’s room. YIKES!!!

It’s the likes of that last nasty fantasy that make the decisions to build fences.††

What’s the chance of something like that ever happening? I’ll venture zero, yet horrific fantasies are extremely persuasive. Negative, traumatic, gory, disgusting, painful, loathsome, tragic, murderous, hideous, shameful, dirty, sadistic, rotten, evil stories stick in our minds so much more easily than pleasant ones. There are far more emotional words in English that express negative feelings than positive ones,††† and we have a clear bias for negative information when we make decisions.††††

Since I was a kid with that endless backyard the rate of reported violent crimes has gone way up. In the sixties there was for every 1000 people in the U.S. about 1 voilent crime every year, and by the early nineties it was up to 7.5. That’s when my wife and I moved from San Francisco to Petaluma, California, which at the time was the perfect picture of an idyllic community where everyone left their doors unlocked.

That all changed a month later when a very very very bad man snuck into our neighbor’s house while they slept and stole their 12-year-old daughter from her bedroom. Over the course of the next 9 weeks, she became famous, dubbed “America’s Child.” The ground search covered 1000 square miles, the air search 3000 square miles. Almost 4000 volunteers mailed over 54 million flyers across the nation and the world.

Nine weeks later when the man was caught and she found dead, everything changed.

After that, it seemed, nobody would ever be safe again.

We moved back to the city. 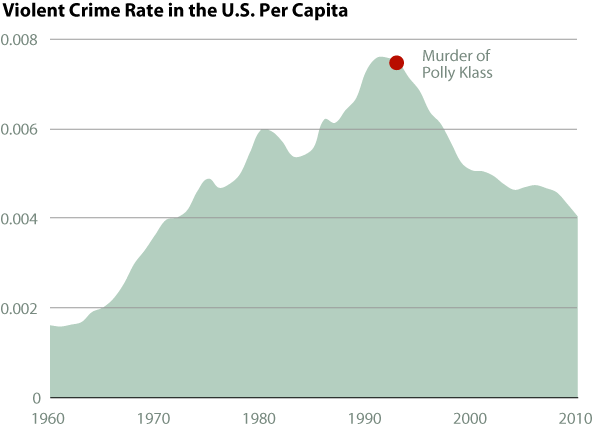 Even though the crime rate has come way way down since the nineties and continues to drop,††††† I get the feeling we will never go back to the days where a dog stealing into our bathroom is cute, instead of a sign of vulnerability, of insecurity— of danger.

So lock the doors and build a fence.

In contrast the ten-month period in which six people were shot on my block crumbled barriers like an earthquake. People opened their homes and hearts to each other and came out to the sidewalks with candles to light and sundries to sell or trade or give away. The block that once attracted exactly zero trick-or-treaters now gives shelter to 1000’s of candy bars inside 100’s of masked mouths every year. I don’t think our fences ever did that for us.

So the question still lingers, and I put it to you, as a Neighbor…

† The square wooden donut is such a bad analogy that I kept it in there so I can say, “At one point I used really bad analogies.” (I’ve never been great at anything, but I could fill a warehouse with “most improved” awards.)

†† Dope smoking, nakedness, and lawsuits happen in the front yards, too.

††† One study by Robert Schrauf and Julia Sanchez: The Preponderance of Negative Emotion Words in the Emotion Lexicon: A Cross-generational and Cross-linguistic Study

†††† is a nice summary of some scientific reasons to believe that statement. (Darn, the link went away.)