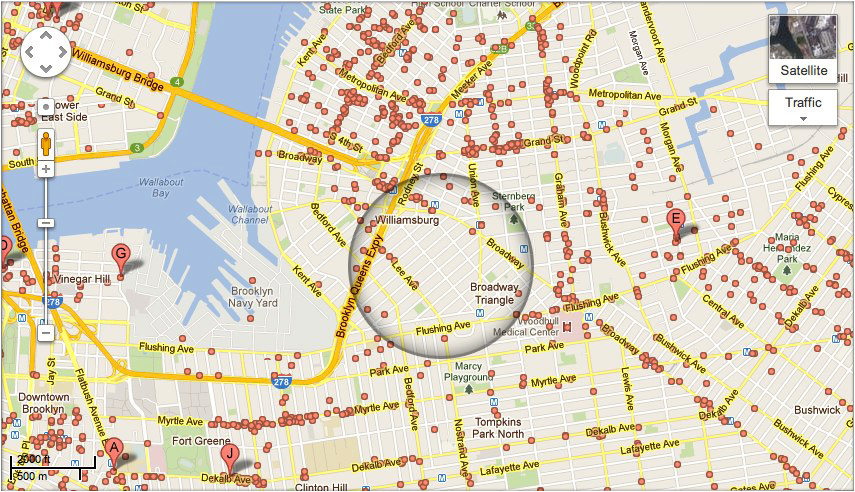 My first day in Brooklyn I tote my iPhone from block to block consulting it for restaurant recommendations, checking the routes to the cafe where I plan to start writing this article, and then mapping out the gigs I’ll be playing with my choir. I traverse Bedford Ave several times, tuning my evening’s plans by way of Google maps and Yelp.

The neighborhood of North Williamsburg is charming and beautiful and still rugged around the edges. With a perfect dinner in my belly, a perfect bar conversation in my head, and a couple perfectly productive hours writing at a perfectly dingy cafe, I feel at once both a tourist and a conqueror. I’m tempted to post to Facebook, “I’m in love.”

And then it strikes me, I can’t get lost!

So for the sake of experiment I ditch my iPhone. Actually, I just put it away knowing I don’t know exactly how to get back to my room. It’s basically, uh… that-a-way.

Even late on a Thursday night Bedford Avenue is still very alive, but as I duck down a side street, the stores and restaurants that have rolled their doors down don’t feel inviting any more. The train over Broadway is louder at night. The rusty door of Moto Cafe where I had breakfast is simply gloomy.

And then I step to the south.

The streets of South Williamsburg are also alive at night; at least there’s movement. Solitary men in black slide like chess pieces across the grid of sidewalks. Like rooks they move in sharp right angles. They are ghosts in their tall hats and long coats, striding fast, gliding across the concrete, appearing around every corner. None seem to notice the outsider in their midst although I observe, just before our paths cross, one of them cut diagonally to the other side of the street. He must be a bishop. Then I notice the double parked minivans, one in the middle of every block it seems, and as I pass I spy through the car windows ghosts paired up whispering to each other words I will never understand.

The slanted grid of this neighborhood throws off my bearings and soon I don’t know south from east. I do know Union Street will lead me to familiar lands, but I’ve crossed Marcy Street three times now trying to find it. I’m tempted to pull out the iPhone even though I’ve only been 20 minutes without it. Instead, I engage one of the ghosts.

“Excuse me. Which way to Union?”

He rotates his body in my direction and chopping the air twice with his flat hand explains, “Like dis, den dis.” And he is gone.

The ghosts don’t care about me. They never will. To them, I’m nothing.

Once on Union I spy the bent reeds and rock piles I had left as way finders, and in a few more blocks, crossing Marcy again, I’m home.

The hole in the map

Go to Yelp and look for anything in South Williamsburg. The pins drop in a wagon circle around the neighborhood with a wide hole in the middle. Apparently there is nothing there. I now know better. And for the brief moments I lost my way, something happened, something I’m trying to explain here, but struggling to accomplish without sounding romantic or didactic.

With a map to the world in our palms it seems impossible to truly lose our way. As Laurie Anderson laments,

Oh, we can lose our way sometimes, like I did for a few minutes in New York City. Just travel to a land where you don’t know anyone or speak the language. Or fail utterly doing something you care about. But in face of change we quickly steer toward our clichés that bring us comfort and, like the maps on our phones, reposition us again as the center of the known universe.

“Everything happens for a reason.”

… a friend recently delivered, and then aptly appended,

Amidst all the methods I teach, the advice I offer, the assumptions I make when I tell people to learn how to focus because their lives will be better for it, there lies a knowing— a knowing that we can’t possibly know any of the unknown unknowns, a humility we glimpse when we lose our way; and it’s that that I wish for us all.

† Laurie Anderson is one of the most technologically saavy artists of our time, and even she hires a computer guy to fix stuff sometimes.