I spent last weekend with 1000 people planning to take over the world.† It’s impossible to sum up what happened in this longish article, so I’ll make this the first of a series. What follows is a presumptuously, conspicuously reductive digest of the key speakers’ presentations plus some words of wisdom from one surprising sage. The theme was a question: How do you live an unconventional life in a conventional world?

World domination is a daunting task, and these folks are up to it. I offer you seven ways to join them.

Go forth and be uncool

That was the call to action by Brene Brown, the first speaker of the conference. I was delighted to hear her proclaim,

“Your experience cannot exceed your willingness to be vulnerable.”

Eager to fully experience this summit, vulnerability became the grounding principle for our interactions with each other, and like she has witnessed in her research, and I experienced before me all weekend, our vulnerability, collectively and individually, became the cradle of hope, empathy, curiosity, innovation, creativity, gratitude, accountability, adaptability, and love.

There is no bullshit to wade through when we lead with vulnerability, and when we take action, criticism should have a high bar for acceptance.

“There are the folks who watch from their seats, and I could care less about what they have to say, but if you are in the arena getting your ass kicked now and then, maybe I’ll accept your criticism.” 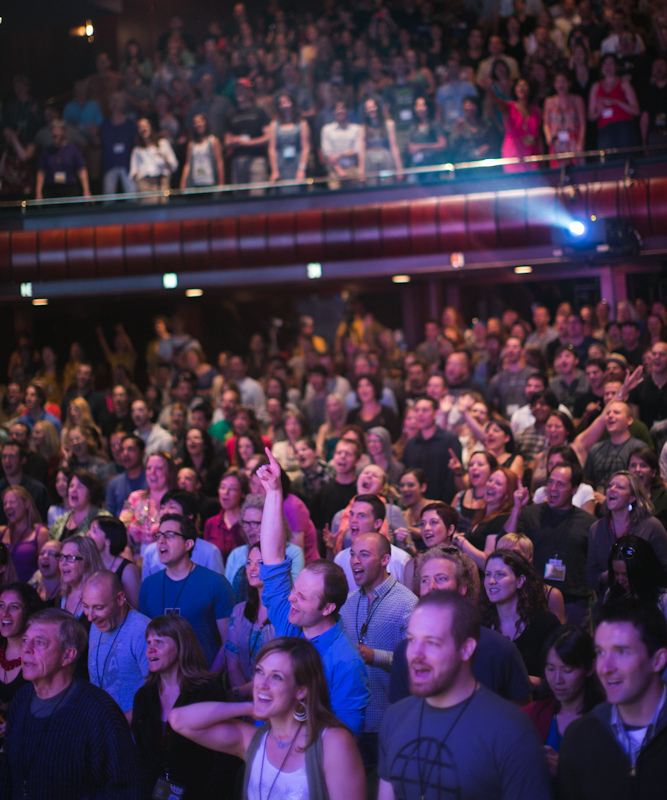 By the end of her talk she had the entire auditorium of people singing at the top of our lungs Don’t Stop Believing, probably the uncoolest song by the uncoolest 80’s band.

We went forth and we were uncool. And as she might have predicted, the experience was profound.

(Brene Brown’s forthcoming book is called Daring Greatly. I dare you to buy it and read it.)

Give up your birthday 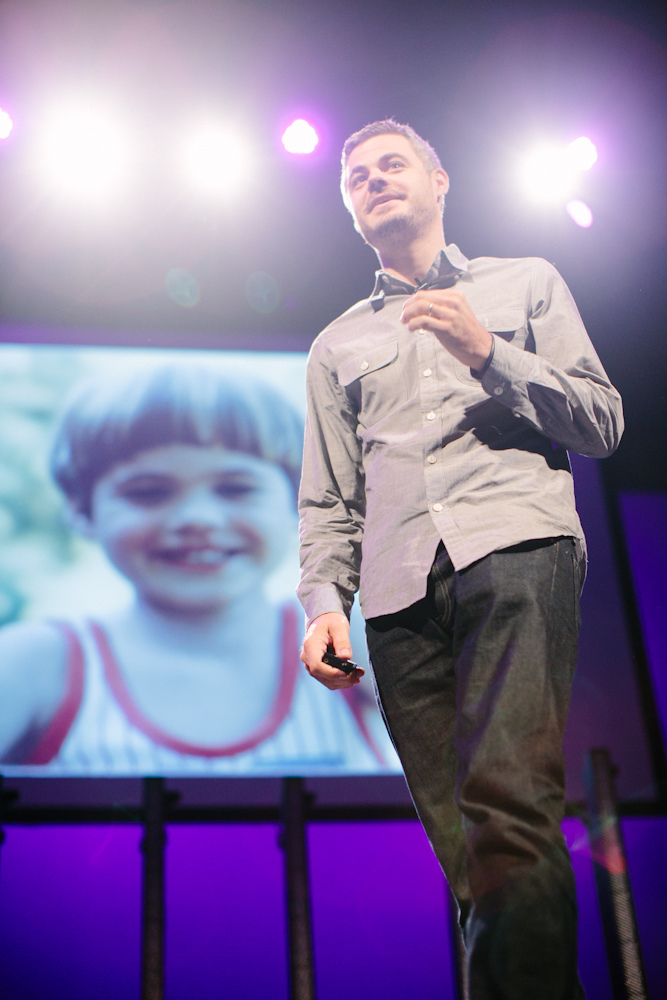 After rockin’ out, we were soon all crying as Scott Harrison told his story of reinvention. After ten years as a night club manager, addict, party animal, and financial wreck, he went on a quest for meaning and found it on a Mercy Ship off the shores of West Africa. Crushed by the tragic condition of so many people who die or barely survive, just because they don’t have access to clean water, he changed everything about his life. Dedicating himself to God and charity, Scott cleaned himself up and founded Charity Water with the simple mission of getting clean water to the billion people who don’t have it.

And he’s doing it. This year he’ll reach a million people, and with 100% growth each year, I believe he’ll get there.

At the end of his talk each of the us 1000 attendees pledged to give up her of his birthday to raise money for the cause. 100% of every dollar you give directly funds water projects. You can see which wells you fund and how many people you help. You can read their stories. They are more stunning than Scott’s.

Sign up to give up your next birthday and bring clean water to people in need. I did.

The pain of rejection is the cost of independence 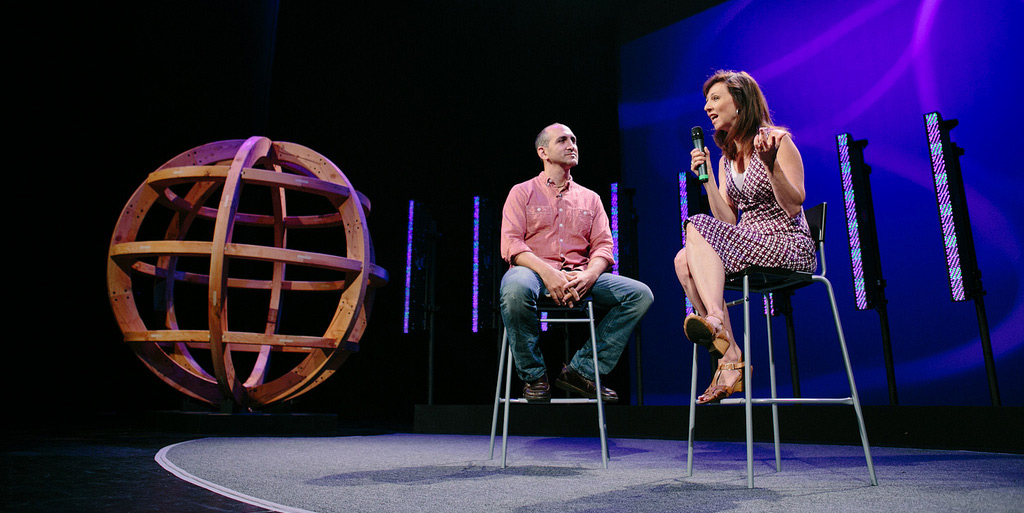 Next, Susan Cain discussed her new book with Jonathan Fields. It took her 7 years to research and write, but she was clearly on to something. Quiet: The Power of Introverts in a World That Can’t Stop Talking became an instant best seller. When more than half of the audience and most of the presenters raised their hands when asked who was an introvert, it was clear that introverts were kicking some serious butt in world changing champaign. How can that be, when extroverts are running everything?

Again, we were reminded of the bravery it takes to live an unconventional life, especially as an introvert. Jonathan Fields mentioned the study in which a group of five people are asked to decide which of two lines is longer. All but one of the participants are shills, and when the shills purposefully pick what is obviously short line, most of the subjects go along with the group, even though it’s clear they are wrong. Susan explained this: Dissenting from the group comes with the pain of rejection.

Yet to live an unconventional life requires regular dissent from the larger culture. That pain is the cost of our independence.

Refuse to accept both
disappointment and praise

When our host Chris Guillebeau introduced Chris Brogan, he talked about his own values for taking action.

“I focus on deliverables, for example, I write 1000 words a day. Chris Brogan writes 2000 words. Then he has breakfast.”

So it wasn’t surprising then when Chris Brogan set the tone of his speech with the following statement: 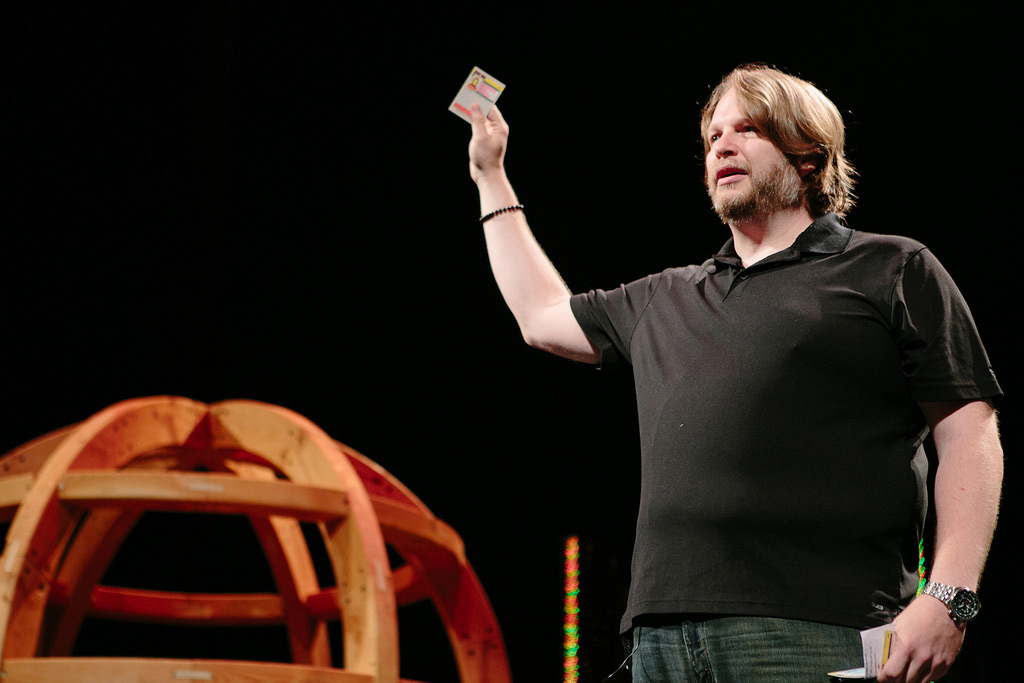 As a comix aficionado, Chris (B) used the theme of finding your superhero powers and served up the funniest and densest speech of the weekend. Half comedy improv, half motivational speech, and half philosophical essay, I was awed by his ability to entertain and enlighten the audience with every phrase. One idea in particular stood out for me, again, on the subject of the bravery required to live an unconventional life.

Ignore criticism, ignore the disappointment you may sense from other people. As he put it,

If you are truly independent, why care about their script? That’s simple enough, but then he mentioned the other side of their script— praise. Now, if you are like me praise is fuel, and yet using his definition, praise simply means, you followed the script they had for you. In some ways praise can be more dangerous because it’s so seductive. You need to train yourself to reject both if you want to know your own path.

Craft your career, don’t discover it.

Cal Newport writes a blog I read pretty regularly. He and I have a friendly argument about the role of Passion and Flow in the life of remarkable people. I was tickled to find out he would be at WDS and impressed by his message.

An avid researcher, prolific reader, author, and trained pattern recognizer (he’s got a Ph.D in math), Cal found a few things in common with the people he studied who could claim to fully enjoy their lives, are (or were) passionate about their work, and had great impact on the world— living what I fully agree are remarkable lives. Here are the Cliff Notes:

These people crafted their lives, they didn’t discover them.

(Cal Newport, unbeknownst to him, probably contributed the most to a complete change in my plans for the next 12 months. Stay tuned.) 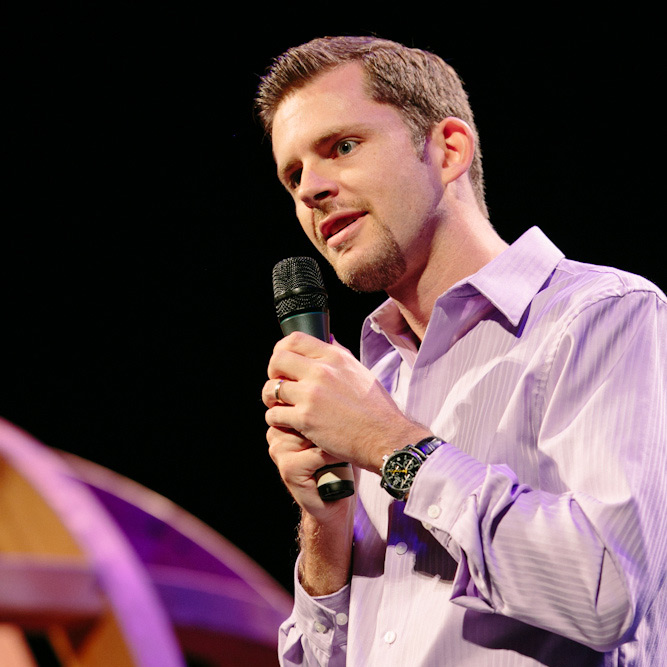 Our host Chris Guillebeau is my role model. He writes a blog called the The Art of Non-Conformity which was the first blog I ever followed. His manifesto, A Brief Guide to World Domination is a must read for anyone who wants to create meaning in her or his life. His most recent book is called The $100 Startup, a series of case studies in which individuals built businesses earning $50,000 or more from a modest investment (in many cases, $100 or less), people with no special skills who discovered aspects of their personal passions that could be monetized, and were able to restructure their lives in ways that gave them greater freedom and fulfillment.

At the end of the World Domination Summit Chris announced that the conference had made a profit— a cool $100 grand, which amounted to about $100 for each participant. So, as we left the auditorium volunteers handed each of us $100 cash and a note.

“We’d love to see how you can put these funds to good use. Start a project, surprise someone, or do something entirely different— it’s up to you.”

Next week you’ll hear my plans.

Finally I offer you my own tidbit. Riding the bus is a not the fast path to world domination, but it does expose you to the people in a way that driving or walking never will. I rode the bus late on Friday night and found wisdom in an unlikely place. A beautiful girl walked passed me to her seat, her eyebrows pierced with staples, her hair ratty, and her clothes torn to shreds. She was a perfect picture of defiance: a teenager railing against the conventional world around her. As she passed I noticed her back was almost bare, and revealed through the tatters of her shirt were five words written in Sharpie across her skin in big capital letters offering important this advice by example: If you’re going to do something, go all the way. The words she picked were more eloquent.

I FUCK EVERYTHING I KILL

† The World Domination Summit is held every year in Portland. People from all over the world converge to share stories of adventure, community, and service, and strategies for living an unconventional life in a conventional world.